We have put together a library of British Birds to help you identify the birds in your garden & the countryside around you.

The Fieldfare is a large colourful thrush. Fieldfares breed in Scandinavia and the former Soviet Union including the Baltic States.

In central Europe the breeding range has extended to Holland, Belgium, Germany, Switzerland and France.

The Fieldfare starts arriving in the UK around October and numbers increase throughout the winter. They return to their breeding migrate between March – May.

Adult
The Fieldfare has brown plumage on its back, with its wings and tail shaded to a very dark rich chestnut/red tone. Its breast is dappled with blackish markings, its rump and head are grey.
Size
23 - 25.5 cm
Bill
Yellow medium, pointed
Legs
Black; medium in length
Habitat
Can be spotted in the countryside, along hedges and fields. Hawthorn hedges and their berries are favourite feeding spots. In severe winters they can be seen feeding in your garden.
Behaviour
Stand very upright, hopping as they move.
Flocking
Can be seen in small flocks or flocks of a hundred or more
Voice
Chucks, squeaks and whistles.

If you are looking for a mix that contains a blend of your bird’s favourite ingredients you have found them with this new High Energy Mealworm & Fruit Muesli Mix. 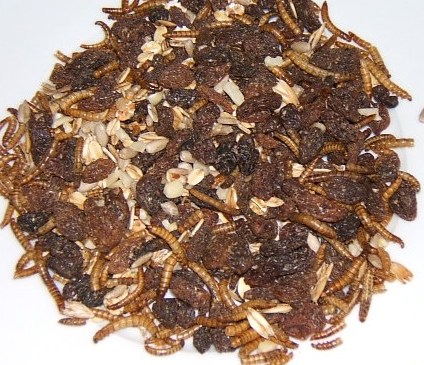